The Family Of Mark and Rebecca Sabel

Mark (also called Marks by the family) was a tailor born in Vidzy, and arriving in when he was about 16. I believe my grandparents met through their siblings Joe Sabel and Annie Wright, who also married each other and then emigrated to the . 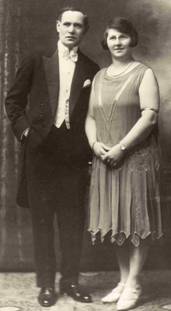 When my mother Hannah was about one year old, Mark wanted to try his luck in and went off on his own to . A few months later Rebecca set out with her young child to join him. She was just twenty years old.

Rebecca was born in in 1882 one of a large family nine in all of which she was in the middle. She went to the Jews Free School In London's East End and I have been told that she was so bright that they wanted her to stay on after the normal leaving age around fourteen in those days and train to become a teacher, but unfortunately her family couldn't afford to let her and so she had to leave and go to work in a clothing factory.

On arrival in NY, Becky and Mark lived in an apartment near their relatives but my grandmother told me that she felt so homesick for London that she never really settled, and knew somehow she would have to return to England. She also once told me how scared she was of the violence in NY. She said that there were many instances of crime, and gunfire was frequently heard. Once it was so close that she stayed awake all night, but in the morning found that a bottle had exploded in her kitchen!

However, after giving birth to her second child Sidney she and Mark decided to come back to , and still wanting to be close to the family came to live in Ham, which was the next road to . My mother and her two brothers all went to the same school as their cousins, , which was only about five minutes walk from all their respective homes. 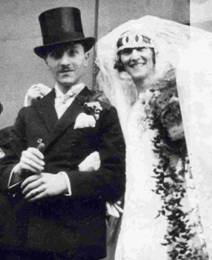 They met as adults at a family wedding. My father's mother was Mary Freeman (nee Berman) and she and Becky Wright were first cousins. I was born in 1927 in where my parents lived for a short time and they then moved to No. 31 which my grandfather bought for them, and where we lived until we were bombed out in 1941. By then my grandparents had moved in with us in 1935 and I began to see much more of the Sabel uncles Barnett and Abraham, Aunts Minnie and Leah, Aunt Eva and her family who also lived on Gladstone and all the Sabel cousins. 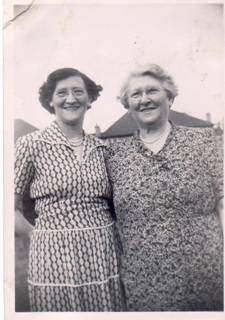 Rebecca Wright and her daughter Hannah

In those days, without television, a good deal of family visiting went on and never did a week go by without visits afternoon or evening by family members. Many were the times when I came home from school to find aunts in our home gossiping and taking tea with my mother and grandmother. My mother's Sabel cousins were all known to me, and often too when I was old enough to go out of the house on my own, on the way home from going to the library or the shops if I met family member from numbers 1 and 3 Gladstone I was invited in to the workshop in the garden between numbers 1 and 3 and the staff there made an enormous fuss of me, giving me sweets and chocolates and letting me show off with my singing and dancing - aspirations for the acting career I was set on, but unfortunately never attained.

My sister Marilyn was born in 1938, and in 1939 when the second world war began, our lives became very disrupted and after being evacuated twice and then returning home the bombing began, and finally one night two bombs dropped in Gladstone Avenue. The first bomb was a landmine, which fell on the opposite side of the road and demolished the house I was born in - No. 74. (There is now a block of flats built on that site) The second bomb fell in the doorway of No. 3 but did not explode and just sat there. Everyone in the road was evacuated to a nearby church hall. Without realising it however Auntie Leah was still in No. 3 and not knowing what stood in her doorway managed to squeeze past the bomb safely! Our house had no roof and no windows. We never returned there.

Instead, my mother's cousin Jack and his wife Louise who used to visit us came to our rescue and found a lovely empty house near to theirs in Hillingdon which we rented and lived in with my grandparents and which they later purchased. I became very fond of Jack (who was an ambulance driver) and Lou and their sort ' Clive who was a lovely little boy.

Whilst living in Hillingdon we often used to see Sidney and Betty Sabel who lived in Ealing. They would visit us regularly and in those dark days it was very heartening to see other family members on a fairly regular basis. The other family members who we saw at that time were Harry and Gladys Sabel and their children and we were invited to their home for a farewell party when they emigrated to after the war ended.

My mother's brother Sidney was called up and spent the war in the army, but Morty was not enlisted and carried on in the menswear shop in white chapel opposite the London hospital, where he was later joined after the war by Sidney and my grandfather. Sidney married Phyllis Cligman and had one daughter Valerie, and Morty was married to Lily Raingold and had one son Malcolm married to Sheila and daughter Marsha. 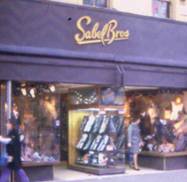 My sister Marilyn married Michael Eldon and have a son, Gary, who is married to Linzi and they have a daughter named Hannah.

I married in 1949 to Harry Cohen who I met when he had just been demobbed from the army after serving nearly seven years. He went on to study to become a Chartered Surveyor and we had a son and a daughter. Sadly we lost Harry to cancer in 1991.

My children are both now married. My son has two girls of 22 and 19. My daughter married for the second time ten years ago after tragically losing her first husband to a heart attack, leaving her with three young children two boys aged ten and seven and a daughter aged three. However, she married again and now has another daughter aged eight.

Looking back on the few short years I was lucky enough to have lived close to my mother's family, I must say that I am very grateful for the many happy memories this has given me.